Bavink on consumation of redemption 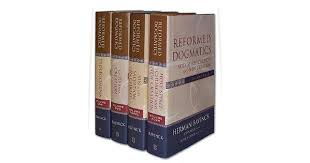 In the second place, Christ’s redemption is not a second, new creation but a re-creation.  Things would have been much simpler if God had destroyed the entire fallen world and replaced it with a completely new one.  But it was his good pleasure to raise the fallen world up again and to free from sin the same humanity that sinned.  This deliverance consists in the reality that Christ delivers his believing community from all sin and from all the consequences of sin, and therefore causes it to completely triumph over death as well.  Death is the last enemy to be annihilated.  And the power of Christ is revealed in the fact that he not only gives eternal life to his own but in consequence also raises them on the last day.  The rebirth by water and Spirit finds its completion in the rebirth of all things (Matt. 19:28).  Spiritual redemption from sin is only fully completed in bodily redemption at the end of time. Christ is a complete Savior: just as he first appeared to establish the kingdom of heaven in the hearts of believers, so he will one day come again to give it visible shape and make his absolute power over sin and death incontrovertibly manifest before all creatures and bring about its acknowledgment.  ‘Corporeality is the end of the ways of God.’