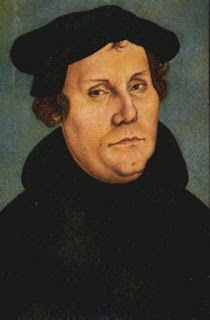 Luther's salvation theology is often thought of as "the great exchange: Christ's righteousness for our sin."  That is certainly true, but that is not the whole picture.  In The Freedom of the Christian, he puts the great exchange in the context of (marital) union with Christ, as well as in Christus victor language.  Luther, like most theologians who get caricatured and thereby shrunken by later systematizers and summarizers, is richer and more nuanced than we often remember.

"The third incomparable benefit of faith is that it unites the soul with Christ as a bride is united with her bridegroom.  By this mystery, as the Apostle teaches, Christ and the soul become one flesh [Eph. 5:31-32].  And if they are one flesh and there is between them a true marriage—indeed the most perfect of all marriages, since human marriages are but poor examples of this one true marriage—it follows that everything they have they hold in common, the good as well as the evil.  Accordingly the believing soul can boast of and glory in whatever Christ has as though it were its own, and whatever the soul has Christ claims as his own.  Let us compare these and we shall see inestimable benefits.  Christ is full of grace, life, and salvation.  The soul is full of sins, death, and damnation.  Now let faith come between them and sins, death, and damnation will be Christ’s, while grace, life, and salvation will be the soul’s; for if Christ is a bridegroom, he must take upon himself the things which are his bride’s and bestow upon her the things that are his.  If he gives her his body and very self, how shall he not give her all that is his?  And if he takes the body of the bride, how shall he not take all that is hers?

"Here we have a most pleasing vision not only of communion but of a blessed struggle and victory and salvation and redemption.  Christ is God and man in one person.  He has neither sinned nor died, and is not condemned, and he cannot sin, die, or be condemned; his righteousness, life, and salvation are unconquerable, eternal, omnipotent.  By the wedding ring of faith he shares in the sins, death, and pains of hell which are his bride’s.  As a matter of fact, he makes them his own and acts as if they were his own and as if he himself had sinned; he suffered, died, and descended into hell that he might overcome them all.  Now since it was such a one who did all this, and death and hell could not swallow him up, these were necessarily swallowed up by him in a mighty duel; for his righteousness is greater than the sins of all men, his life stronger than death, his salvation more invincible than hell.  Thus the believing soul by means of the pledge of its faith is free in Christ, its bridegroom, free from all sins, secure against death and hell, and is endowed with the eternal righteousness, life and salvation of Christ its bridegroom.  So he takes to himself a glorious bride, “without spot or wrinkle, cleansing her by the washing of water with the word” [Cf. Eph. 5:26-27] of life, that is, by faith in the Word of life, righteousness, and salvation.  In this way he marries her in faith, steadfast love, and in mercies, righteousness, and justice, as Hos. 2 [:19-20] says.

"Who then can fully appreciate what this royal marriage means?  Who can understand the riches of the glory of this grace?  Here this rich and divine bridegroom Christ marries this poor, wicked harlot, redeems her from all her evil, and adorns her with all this goodness.  Her sins cannot now destroy her, since they are laid upon Christ and swallowed up by him.  And she has that righteousness in Christ, her husband, of which she may boast as of her own and which she can confidently display alongside her sins in the face of death and hell and say, “If I have sinned, yet my Christ, in whom I believe, has not sinned, and all his is mine and all mine is his,” as the bride in the Song of Solomon [2:16] says, “My beloved is mine and I am his.”  This is what Paul means when he says in I Cor. 15[:57], “Thanks be to God, who gives us the victory through our Lord Jesus Christ,” that is, the victory over sin and death, as he also says there, “The sting of death is sin, and the power of sin is the law” [I Cor. 15:56]."


- Martin Luther, Freedom of a Christian