God can only be known through God 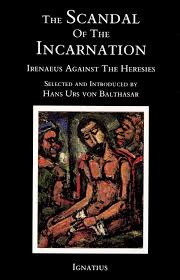 Irenaeus (b. circa 130 AD), writing to refute the Gnostic heretics in The Scandal of the Incarnation, says:


"No one can know the Father without the Word of God, that is to say, unless the Son reveals Him, nor can one know the Son without the good pleasure of the Father (cf Matt. 11:26ff).    IV 6,3

"...Lavishly, ungrudgingly, He has granted men to know God the Father through adoption and to love Him wholeheartedly..."  IV 16,5


"Read the prophets carefully, and you will find that all the actions, all the teaching, all the sufferings of the Lord have been foretold by them.  Now it may be that the question will come into your mind: Did the Lord bring us anything new by His coming?  The answer is this: He brought us all newness by bringing Himself, who had been foretold."    IV 34,1

"Everything became new when the Word, in a new dispensation, came in the flesh to win back to God man who had gone off from God.  Thus men were taught to worship, not a different God, but the same God in a new way."    III 10,2