Review of Peter Leithart's Traces of the Trinity 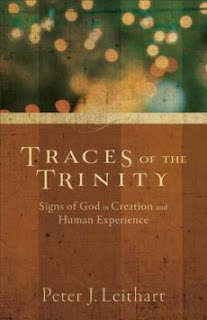 This is the work of a sensitive observer, someone who is attuned to notice and carefully point out the nature of things at their core functioning and their underlying design. Leithart sees evidence of the triune nature of the creator-God in reflections and shadows of mutuality and interconnectedness seen all throughout creation; in the way so much of human interrelationship as well as the interdependence of all of creation displays something of the triune characteristics of the Designer. Speaking as a believer, I was led to awe and wonder at seeing more richly the triune nature of God woven throughout all that has been made. There is also an apologetic function for this book in engaging thoughtful unbelievers with the evidence of a triune relationship standing behind and woven throughout all that exists.

This book could have been subtitled, "Patterns of Perichoresis" or "Mosaics of Mutual-indwelling", since that is the specific aspect of the Trinity that Leithart examines here: the mutual indwelling of the three persons of the triune Godhead. (Admittedly such a subtitle might have made this sound like a book for the professionals, a "theologians-only" project, and scared laypeople away, which would have been a shame. Good thing nobody asked me.) Leithart focuses attention on perichoresis as demonstrated in everything from sexuality, language, and music, to time, ethics, and logic. Whether discussing the physical and emotional mutual-indwelling of man and woman in marriage or mother and baby in pregnancy, or discussing the perichoretic nature of how the past meets and overlaps with the future in the present moment and each serves to define the other, Leithart's observations draw the reader to look at everyday experience through fresh, triune lenses.

As with everything Leithart writes, not only is this an interesting and edifying read, it is also very enjoyable. I hope this is the first of several such volumes of tracing the Trinity throughout life and creation.  It would be particularly interesting to see other aspects of the triune nature and life of the godhead examined. Highly recommend.
Posted by Dan Glover at 14:35