Evangelicalism - how it all started and what it really is

Over the last couple of years there have been many calls for discontinuing the use of the term "evangelical" for religiously and ethically conservative Protestant Christians.  This call has gone out mainly by Evangelical leaders and teachers who opposed the election of Donald Trump.  I am certainly sympathetic to the concern that evangelicals have, in the US, become too closely tied to the Republican party such that too often it is not their doctrine, biblical convictions or personal piety that publicly defines them as evangelical but their voting habits, at least according to the media.  I don't think this is a good thing, no matter how one voted or what one's opinion on the Trump presidency is.  However, I would like to challenge the those who argue for discontinuing the use of the term evangelical.

This seems to me to be largely an American issue.  One of the problems with Trump's presidency is his America-is-greatest and America-is-always-right attitude.  Those who advocate discontinuing the use of the term evangelical have caved in to Trump's and the media's parameters of public debate, which is a discussion that seems to forget that the rest of the world exists.  No matter what they may think of him, Evangelicals in the rest of the world didn't vote for Trump.  Why non-American evangelicals should give up using the term evangelical because of the voting choices of some (not all) American evangelicals does not make sense.  The term evangelical was around before Trump.  Perhaps those in the evangelical camp ought to fight for the recovery of the right understanding and use of the term rather than cave in to the media and cultural pressure to dispose of it. 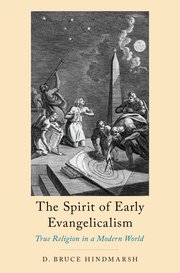 Toward understanding Evangelicalism, I would like to recommend a book.  Bruce Hindmarsh, one of my professors at Regent College, has written an excellent work on The Spirit of Early Evangelicalism.  This book describes the spiritual awakening of the earliest leaders of Evangelicalism as well as their interactions with the emerging modern age.  Anyone who thinks that a single election or the media coverage of a 4-year presidential term is reason enough to quit using a term that has represented a rich, three hundred year long, bible-centered, Protestant spiritual tradition really should read this book before they jump on the band wagon.

For a taste of what to expect from this book, see this interview at the Gospel Coalition.

As Bruce says in the interview:   'The gospel (or “evangel”) as the good news of Jesus Christ to needy sinners transcends time and place. God’s decisive word has rung out for all time: “This is my beloved Son: Listen to him.” The gospel is, as Luther said, “nothing else than Christ coming to us, or we being brought to him.” Yet a new episode in the history of Christian spirituality came about 300 years ago as the gospel was preached afresh under the conditions of a newly modernizing world.'
Posted by Dan Glover at 12:17