A Reformation Debate: Calvin and Sadoleto 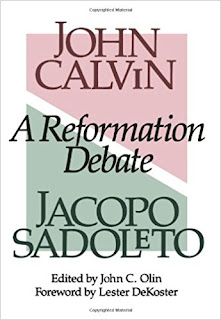 In 1539, Cardinal Jacopo Sadoleto's wrote a letter to the people and senate of Geneva, winsomely welcoming, and also warning them, to return to the Roman Catholic Church or suffer eternal punishment in hell for being Protestant. Sadoleto's letter is winsome in tone, but it is quite dishonest and slanderous toward the Reformers in its representation of both their doctrines--in which Sadoleto portrays a number of strawmen--and in their lives--for example, accusing the Reformers of breaking from the RC Church so they may have freedom to exercise their lusts and to accumulate wealth according to their greed. This is polemical but it is well worth the read.

Some people who have read this exchange have mentioned that Sadoleto is so kind and Calvin such a jerk. As someone with pastoral experience, after reading each letter carefully, I am amazed at the restraint Calvin shows in his reply. Sadoleto's letter is a work of smooth rhetoric, meant to play on emotions and fears in its arguments and persuasions, but it is dishonest and disingenuous throughout the seemingly loving attempts to win back the Genevans to the Catholic Church. Calvin is a jealous shepherd of the flock, even of a city in which some of the citizens and rulers despised and persecuted him. He is defensive and combative in his reply, and he can wield rhetoric also. For the most part, however, his reply is fair, even if harsh to our modern, overly sensitive ears. He portrays Catholic doctrine and practice truly, according to the contemporary situation of the day. His reply is also far more substantial than Sadoleto's attacks. Having read a fair bit of Reformation era history and doctrine (from both sides of the conflict), while I think it was a shame that the Reformation had to happen at all, I still firmly believe the Protestant Reformation did indeed have to happen. I readily admit that, clearly not all the Reformers did and taught was right or good and even much that was good was not so in an unqualified way. And yes, the Reformation helped to pave the way for some aspects of a growing secularity in society, but I do not believe the Reformers bear nearly as much blame even for those aspects as the corrupt and errant church which, clearly not getting its own house in order and not listening to the protests of the Reformers, created a situation in which protest and separation was the only option left for those who would not recant and submit to the corrupt hierarchy. I am forced to say that the Reformation was necessary because, from what I can see in the history books and theological debates of the day, it seems highly unlikely that a drastic enough reforming movement could have arisen from within the RC church due to the state of the church hierarchy and the ignorance of the laity and most of the clergy at the time.

The excerpt below is from near then end of Calvin's reply to Sadoleto:


But the most serious charge of all is, that we have attempted to dismember the Spouse of Christ. Were that true, both you and the whole world might well regard us as desperate. But I will not admit the charge, unless you can make out that the Spouse of Christ is dismembered by those who desire to present her as a chaste virgin to Christ – who are animated by a degree of holy zeal to preserve her spotless for Christ – who, seeing her polluted by base seducers, recall her to conjugal fidelity – who unhesitatingly wage war against all the adulterers whom they detect laying snares for her chastity. And what but this have we done? Had not your faction of a Church attempted, nay, violated her chastity, by strange doctrines? Had she not been violently prostituted by your numberless superstitions? Had she not been defiled by that vilest species of adultery, the worship of images? And because, forsooth, we did not suffer you so to insult the sacred chamber of Christ, we are said to have lacerated His Spouse. But I tell you that that laceration, of which you falsely accuse us, is witnessed not obscurely among yourselves – a laceration not only of the Church, but of Christ himself, who is there beheld miserably mangled. How can the Church adhere to her Spouse, while she has Him not in safety? For where is the safety of Christ, while the glory of His justice, and holiness, and wisdom, is transferred elsewhere? (92-93).

The next time you're tempted to think the Reformers over reacted to the church problems of their day, or the next time you are reading some post-Vatican II theologians and thinking to yourself, "man, what was Luther and Calvin's problem?" read this book (and Luther's 95 Theses). Remember that it was not de Lubac and von Balthasar and Congar and Ratzinger that Calvin was taking issue with. It was the Roman Catholic church of his day, not ours, with which he was quarreling. And I thank God he stood his ground.

That said, reading much of von Balthasar over this last couple years, it is clear to see that Catholic theology in our day has moved away from Trent and toward the issues concerning the Protestant Reformers. For this also I am thankful. I hope the discussion between theologians across East and West and Catholic and Protestant lines continues, and I hope it is centered on the study of Scripture and never separated from the life of the church in the midst of the world.
Posted by Dan Glover at 23:52