Everyone I preach to is either dead or used to be dead...


I was privileged to preach for a couple Sundays in a church out in beautiful Prince Edward Island two summers ago when our family was holidaying there.  I had no idea I would be preaching when we planned our trip, but when we got there and went to a church that some of my wife’s extended family attends, finding out they had just lost their pastor, I offered.  As a mentor and good friend used to say, “be ready to preach, pray, or die at a moment’s notice”. 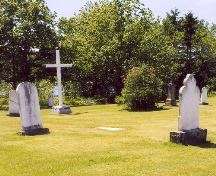 Prior to preaching, I needed some quiet time to pray and prepare my heart and ask for God to work through my preaching.  Right beside the tiny country church was a cemetery.  I hopped the fence and wandered amongst the grave markers while praying for the service, the sermon, and the souls of all who would be attending.  Then a thought occurred to me.

In a few minutes I would be preaching to a group of people, probably some of whom at least, were as spiritually dead as the folks I was walking among were physically dead.  Scripture says that in our natural state all people are dead in their trespasses and sins (Eph. 2:1, 4-5).  Not weak, not injured, not handicapped, not disadvantaged, not exhibiting concerning symptoms, but dead.  What hope is there in preaching to dead people?  I might as well preach my sermon right here in the cemetery.

But the God who inspired the Scriptures is the same God who raises the dead (Eph. 2:5-9).  Jesus called Lazarus to come forth from the tomb (Jn. 11) and Lazarus came.  Jesus didn’t bargain with him, Jesus didn’t plead with him, Jesus didn’t ask a dying man to summon his last vestige of strength and sit up.  Jesus commanded a dead man to live.  And because Jesus is God-enfleshed, the fullness of God in bodily form, the image of the God who gives life to the dead and who speaks what does not exist into existence (Rom. 4:17), Lazarus came forth from the grave.

When a preacher gets up before a group of people and rightly declares God’s Word, there is usually a mixed crowd composed of some believers and some unbelievers.  That means that everyone he is preaching to either is currently dead or used to be dead.  It is God that resurrects people, working by his powerful Spirit, through the proclamation of the gospel of Jesus Christ, as recorded in the Scriptures.  The message of salvation through the Son of God, applied to the hearts of people by the Spirit of God, under the sovereign purpose and calling of God the Father, that is power enough to raise the dead.  So a preacher may preach with the confidence that the Word he is proclaiming to dry bones is the Word of the God who, in his glorious love and sovereign power, delights to raise the dead.
Posted by Dan Glover at 00:37