When the Bible is irrelevant

Our church, and many others, makes a practice of reading through the Scriptures in our worship services.  There are many reasons we do this.  One of them is that, unfortunately, the passages we read on Sunday together is the most Scripture some people will get all week.  It shouldn't be that way, but it sometimes is.  Another reason is that, as Christians we believe that all Scripture is worth reading and knowing and not just because it is an interesting record of the past or of what people used to believe but because it is edifying and useful today for our Christian lives.

"All Scripture is breathed out by God and is profitable for teaching, for reproof, for correction, and for training in righteousness, that the man of God may be competent, equipped for every good work."
-  2 Timothy 3:16-17

When the Apostle Paul wrote this, under the inspiration of the third person of the triune godhead, I presume that when he said "all Scripture," he meant "ALL Scripture."  So, what about when we come to those passages that seem completely irrelevant to us in the here and now?  Perhaps we are reading along in Leviticus, say, and we come to the passages that deal with what Israel was supposed to do when they found mold in the walls of their tents during their wilderness sojourn.  As you read these verses from the comfort of your town house or your bungalow that has a fresh air exchanger hooked into your forced air furnace, you might say to yourself, "exactly how is this relevant and useful to me?"

Let me just say first that, depending on how you ask this question, this could be the first step in a really good Bible study session.  If you ask this question from a firm conviction that when Paul penned the above sentence to Timothy, he meant it, and now you are determined to find just how it applies to you here and now, and you are prepared to do some digging and to give this some serious thought and prayer, and to find out how other past and present teachers and preachers have understood this passage, great.  But if you ask this question with a roll of the eyes, muttering "what-ever" under your breath, you're probably not in the mindset to even want an answer much less to go looking for one. 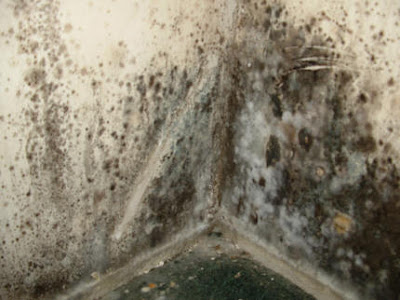 Several years ago, my wife and I lived in a fairly run down apartment.  We lived there because it was cheap and we were building a house at the time, and trying to pay rent while paying a construction mortgage wasn't easy.  We had only two of our four children at that time, and they shared a bedroom next to ours.  The apartment was old and maintenance clearly hadn't been one of the land lord's highest priorities.  Our girls, aged 3 and 1 at the time, were sick for quite a while with what we assumed was a chest cold which they just couldn't seem to shake.  Then one day, we found a large soft spot in the gyp-rock (sheet rock, to Americans) beneath their bedroom/playroom window.  Prodding around with my finger, I discovered a large mass of black mold beneath the paint and behind the window trip.  Of course my wife and I were quite concerned, knowing that mold can cause serious health problems.  Then it occurs...

God the Father loves his children too.  When the instructions in Leviticus were given, he had just rescued them from slavery in Egypt through great and terrible signs and wonders.  He had just defeated the Egyptian army for them in the waters of the Red Sea.  Now he is leading them by a pillar of cloud by day and a pillar of fire by night.  He is giving them his law, his house rules for his family, for the people who are called by his name.  He does all this because he loves them.  And because he is a loving Father who wants the best for his children, he doesn't want them getting sick or dying from mold in the walls of their tents.  We think of the big stuff - the showdown between Pharaoh and Moses or between YHWH and the gods of Egypt.  We think of the battles Israel fought in the wilderness and won because God fought for them.  We think of the miraculous manna from heaven every day, just enough every time, or the water from solid rock.  But a good and loving father doesn't just repel the home intruder in the middle of the night and bring home the paycheque to buy the groceries.  A good father cares about mold in the walls because he cares about the well being of his children, the children that are called by his name.  He loves them and nothing that could harm them is beneath his notice.  The God of the Exodus is the God who did not save his children from slavery to have them die of a lung infection.

You don't have to have moldy walls for this passage to have modern day relevance to you.  This is an example of the kind of care and the level of concern that God has for his children.  He is the God who feeds the birds of the air and clothes the flowers of the field.  How much more valuable are you than they?
Posted by Dan Glover at 22:31